How is chromatic aberration in photography formed

How is chromatic aberration in photography formed

What is chromatic aberration?

The wavelength of visible light for the average person is between 400nm (violet) and 700nm (red). The refractive index of a material (optical glass) varies with the wavelength of the passing light wave, and is called “dispersion”. The famous “trigonometry” experiment proves the existence of dispersion. Chromatic aberration is caused by the phenomenon of lens scattering, due to the difference in wavelength of different colors of light will be under the photographic lens, the image of the object around the high contrast may appear blurred or obvious color fringes (red, green, blue, yellow, purple, magenta) is called chromatic aberration.
A perfect view of the lens can focus all wavelengths to the same point, where the best focus and the smallest blur circle are as shown in the figure: 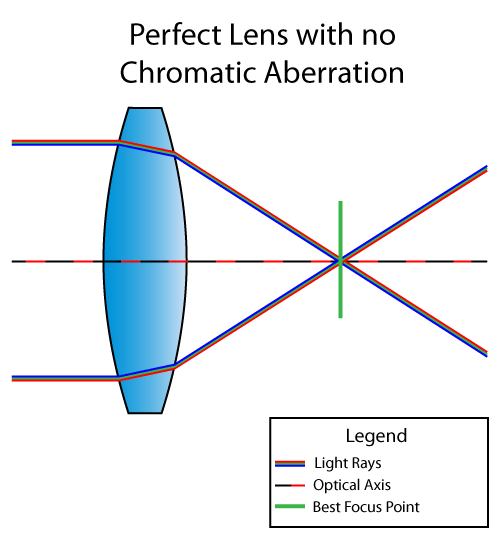 Lateral Chromatic Aberration (LCA) differs from vertical chromatic aberration in that it does not appear in the middle of the image, but only in high-contrast areas at the edges of the image. Blue and purple are often found in fisheye, wide angle and low quality lenses. Horizontal chromatic aberration cannot be eliminated by reducing the aperture, but it can be eliminated by post-production.

The camera uses visible light for imaging. When the light molecules of various visible light reaches the camera’s CCD (light-sensitive device), through electronics, the image is presented. When the intensity of light is good, the camera imaging is also good, but, with the light illumination (intensity) of the weakening, imaging also becomes worse, mainly in the “noise” to increase the appearance of the image also becomes blurred (such as changes in the camera image at dusk). As the light illumination is further reduced, the color camera can not be imaged.